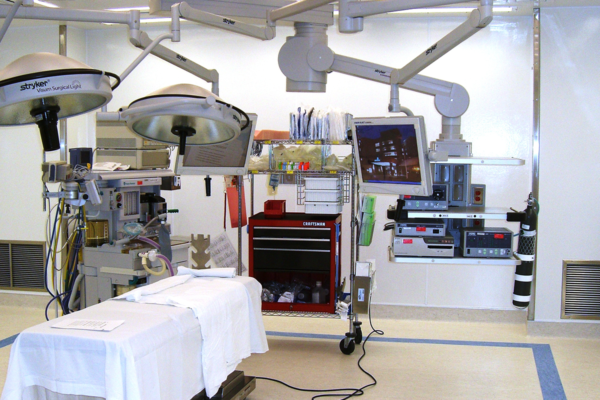 SBEC provided mechanical and electrical engineering for this project that was completed as part of the OR/SPD Remodel Project. Two existing nominal 10,000 CFM and 9,000 CFM indoor AHU’s were removed and replaced with a new nominal 12,000 CFM AHU and nominal 9,000 CFM respectively.  The new unit was a custom built indoor unit that was specifically sized and constructed in sections so that it could be manually accessed across the roof, under a pedestrian bridge, and through the existing mechanical room double door.  Temporary ductwork was also installed so operating rooms could remain in operation during installation. The temporary ducts were extended from the surgery suite supply and return duct mains over to supply and return duct mains from another air handling unit. Fanwall Technology supply and return fan arrays were used in the design in addition to high efficiency final filtration, and steam dispersion humidification.  The units were also provided with an interior and exterior white powder coat finish, for ease of cleaning.